"Due to the ongoing strike by employees represented by the Inlandboatmen's Union, the Alaska Marine Highway System (AMHS) announces the following cancellations.

As of today, future vessel sailings are canceled according to the following schedule:

The above schedule takes into consideration where each ship is docked, where it should leave to according to the published schedule & it gives AMHS time to get the vessels fully crewed and provisioned and the ships ready to sail."

Passenger fares for canceled sailings are being refunded. Please note that credit card refunds can take up top 7 days to process.

More than 6,554 Alaska Ferry Passengers Looking for Refunds
As of Monday evening, refunds totaling some $2.8 million are in the works to the more than 6,554 travellers who had booked passage on the 11 Alaska ferries now tied up ion various ports as a result of the Inland Boatmans Union (IBU) strike started last Wednesday.
The strike has caused chaos throughout the state and amongst global travellers trying to meet plane / accommodation etc commitments, but now caught in more than 33 Alaska coastal communities.
Most of Alaskas ferry-served communities, including Juneau the state capital, can be reached only by boat or plane and so depend on the ferries for not only passenger travel, but the delivery of groceries, seafood catches, vehicles and other items.
The IBUs last contract with the state expired in mid-2017 & the union has accused the Dunleavy administration of bad-faith in negotiations and labor violations.
Gov Dunleavy, who has expressed a desire to privatize the state operated ferry system, had, last month, announced both deep budget cuts, and at the end of September, the cancellation of ferry service to several Alaska communities until summer 2020.
www. ferrytravel.com provides information on & secure online reservations for: the Alaska Ferries: BC Ferries, Seattle Victoria Ferries and Vancouver Victoria passenger ferry.

The BC Ferries vessel Northern Sea Wolf, was among the respondents to a float plane crash north of Port Hardy & south of Bella Bella on Friday July 26.

The Sea Wolf, part of the northern Discovery Coast Connector ferry route, joined the Coast Guard & other vessels in responding to news of the crash.

The float plane, operated by Seair Seaplanes out of Richmond BC, had been headed to Calvert Island.  An investigation by the Transportation Safety Board is being conducted into what caused the accident.

Passenger fares for these affected sailings are being refunded.
The call center will resume normal business hours on Monday, July 29 from 7:30am  4:00pm.

Due to the ongoing Inlandboatmen's Union strike, Alaska Marine Highway System vessels are currently not sailing.

No Update on Alaska Ferry Strike
On 24 July 2019  the Alaska State Ferry System was shut down by the Inlandboatman's Union of the Pacific.
The State is currently working to reschedule, reroute or to offer refunds for ticketed passengers.
Because Alaska is dependent on the ferry system to transport not only residents and visitors, but exports headed to market, it is anticipated that the strike should be resolved as quickly as is possible
www. ferrytravel.com provides information & secure online reservations the Alaska Ferries: BC Ferries, Seattle - Victoria Ferries and Vancouver- Victoria passenger ferry
Alaska Marine Ferry Press Release: July 24, 2019   4:30 p.m.
The following was just released by the Alaska Marine Highway System PR department.
"This afternoon, the Inland boatmans Union of the Pacific initiated a strike. Alaska Marine Highway Vessels will not be sailing until further notice.   At this time, we are focused on the safety of passengers, crew and vessels. We are reaching out to ticketed passengers to work with them to reschedule, or offer refunds for tickets. We are working to return ships to safe harbor with adequate shore side support.Your patience is appreciated as we work through the logistics of getting passengers rerouted. There is a heavy volume of calls right now, we are doing our best to reach everyone as quickly as possible".
Gift Cards for the Seattle Victoria ferry
Give that special someone a Gift Card for the Seattle Victoria ferry.
Printable cards are available & can be used anytime.
The cards are redeemable at any Clipper ferry office ( however not once onboard) & can be used towards the products or services of your choice.
Although they are non refundable, the cards never expire. 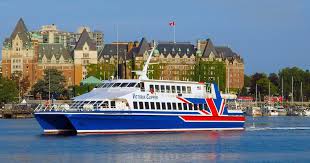