The M/V Tustumena scheduled to return to service earlier than expected.
Ferry service to Homer, Seldovia, Port Lions, Ouzinkie, & Kodiak will resume May 14-17, 2019.
The originally scheduled M/VTustumena voyages will begin again May 18, 2019
Ferry Price Jumps $90,000
In the final 45 minutes of the online auction, the BC Ferry Howe Sound Queen realized a sold price of  $210,000.00.
A bidding war between prospective buyers saw the price of the ferry jump by nearly $90,000 in the final 45 minutes.
Scheduled to retire 01 June 2019, the 74m long Howe Sound Queen ( capacity  300 passengers & 52 cars), was built in 1964 in Sorel Quebec.    She served the Bowen Island-HorseShoe Bay ferry route until 1992 and is  currently serving the Crofton - Vesuvius ferry route.
The owner of the winning bid has not yet been disclosed.
Spirit of BC Ferry Drydocked for 10 days
As a result of the high winds experienced on Saturday 26 April welding repairs to the rubbing strake on the side of the Spirit ship have caused the ferry to be out of service for approximately 10 days.
While the strake damage, which is the ferry equivalent of a damaged vehicle fender is being repaired, BC Ferries have moved the Coastal Renaissance from Swartz Bay to Tsawwassen and additional sailings have been added to the Queen of New Westminster ferry, to better accommodate passengers.
Washington ferry to Alaska
Seattle* - Bellingham Terminal:  2-2-1/2 driving hrs North of Seattle
Bellingham- Ketchikan:   676 Nautical Miles ( 2 day ferry ride)
Bellingham- Juneau:        964 Nautical Miles ( 3 day ferry ride)
Bellingham- Skagway:   1,800 Nautical Miles ( 3 day ferry ride)
* ferries do not travel from Seattle to Alaska

Ferry Fares to Stay the Same:
BC Ferries has announced it will both freeze and reduce some of their route fares.
At the same time, the corporation is considering extending their summer sailing schedule into the 2019 fall season.
BC Ferries has committed to increasing service to its coastal communities and Islands
Commencing 01 April, 2019 ferry service will increase through the addition of  some 2,700 sailings.
In an effort to serve the needs of Islanders and the BC coastal communities, the BC Ferry corporation will reinstate most of the sailing cuts made on 10 routes in 2014 .
April 01, 2019    The following routes will see increased ferry service:
May 01, 2019    Increased ferry service will commence between:
Crofton & Vesuvius
Once new crews are hired later in the year, increased ferry service for the following ports will be announced & implimented.
Port Hardy & Prince Rupert
Skidegate & Allford Bay
Queen of Surrey Experienced Docking Issues
Expect delays in the Vancouver - Sunshine Coast ferry schedules as a result of docking issues suffered by the Queen of Surrey at the terminal near Gibsons this morning.
A tugboat is on the way to help the ferry which is currently caught on a berthing pontoon.
A schedule update can be secured by calling BC Ferries at 888-223-3779 however the next expected sailing from Langdale is at 6:40 p.m. PT.
Alaska Ferry Service Debate
As the Alaska State Legislature grapples with their transportation budget & decides whether or not to abandon the Bellingham WA - Alaska ferry route as they restructure their system, it might be asked whether this would provide a revenue generating opportunity for both British Columbia and for the BC Ferry Corporation ?

With Vancouvers' Tsawwassen Terminal only some 20-25 minutes north of Bellingham, a BC ferry offering service between Vancouver & Prince Rupert would enable travellers to still enjoy the beauty of the coast; to enjoy the trip in Canadian dollars, and to avoid the long drive alternative.
The 5 hr Alaska ferry from Prince Rupert to Ketchican,  would enable visitors seeking access to the State to still enjoy a ferry route that should include the islands of Wrangell, Petersburg, Sitka & Juneau before reaching Haines - where the Alcan Hwy provides access to the rest of Alaska
The downside of this thought is the knowledge that to enter Canada, any US citizen travelling to Alaska via Vancouver would need to carry a valid passport and must not be a convicted felon. ( DUI's are considered a felony in Canada)
Too, transporting weapons could be an issue as neither handguns nor automatic / semi-automatic weapons are allowed into Canada.
Currently it is estimated that some 30,000 passengers a year use the Alaska ferry system to travel between Washington & Alaska: a number that brings with it serious dollars for any community.
Five New Ferries Planned for the BC Ferry Corporation
Designed to add capacity to the popular Vancouver  Vancouver Island routes, the new BC ferries are planned to replace the aging Queen of New Westminster, Queen of Alberni, Queen of Coquitlam & Queen of Cowichan vessels.
With a focus on working toward keeping fares affordable, to reducing the environmental impact of the vessels, to planning for flexibility to meet changing future demands and, to enhancing the passengers' onboard experience, BC Ferries expects the new ferries to start arriving in 2020
Alaska Ferry Schedules for Winter 2019
The State legislature continues to debate both the frequency of and ports to be served by, the Alaska Marine ferries during the winter season ( Oct 2019 -March 2020).
A combination of budget cuts and ferries requiring longer than expected drydock time continues to plague the system.
The Alaska ferry system has struggled over the years to provide confirmed schedules far enough in advance to satisfy travel agents, tour group operators & independent travellers trying to secure Alaska ferry reservations as they make summer plans to explore the State. 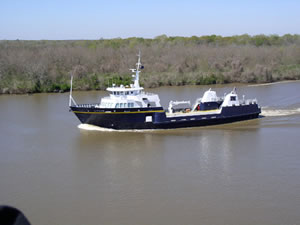 Sailings for the MV Aurora will be cancelled 07 February through 15 February.
It is anticipated that a return to regular service will commence on 17 February

Ferry Passengers Entering Alaska from the Lower 48 Be Aware.

Travellers going to, or passing through Canada, should be aware that both hand guns & automatic weapons are not allowed into the country and may be subject to confiscation.
Also refused entry into the country is anyone with a felony charge.
In Canada a DUI conviction is considered a felony.

If thinking about travelling in Alaska this summer, it would be wise to book before May so that you can secure the vehicle and cabin space you think you will need.

Remember that if transporting weapons in your vehicle, you may want to avoid travel through Canada as hand guns and automatic / semi automatic weapons are not legal in Canada and will likely be confiscated. When entering Alaska from the Lower 48, the only way to avoid going through Canada is either by air, or by using the cross-gulf ferry to Whittier, Homer or Valdez. (See the Alaska route map on ferrytravel.com Driving the Alcan highway is not an option for anyone with either weapons or a DUI because it does not avoid a quick entry into Canada.

With only 10 sailings in either directions each year, summer ferry space to Whittier is usually sold out before April.

Cabins on the Bellingham - Whittier summer crossings are beginning to get tight.
If planning this 5 day Alaska trip from Bellingham be sure to confirm your reservations as soon as you know your intended dates.
Reminder: The cross-gulf ferry only travels to Whittier 2x per month and only the 4 Berth cabins have a private sink, shower and toilet.
All 2 berth cabins share washroom facilities down the hall.

Sailings scheduled between March 21 thru April 3, 2019 on the MV Kennicott are now canceled.
Alaska Marine anticipates the Kennicott will resume regular ferry service from Ketchikan to Bellingham commencing April 4, 2019.

Due to a mechanical issue, the M/V Aurora has cancelled her Sunday, January 27, 2019 sailings.
Ferry service is however expected to resume service on Monday, January 28, 2019, so as to accommodate student sports teams returning home to Valdez early that day.

Celebrate Valentines Day in Victoria on the Seattle Ferry.

If thinking of a special Valentines Day surprise, consider a "mini-cruise" from Seattle to Victoria BC. The crocus and daffodils are starting to appear and with the US to Canadian dollar at an exchange rate of about $1.30 Canadian, buying anything is a bargain for US visitors.
But don't delay

Valentines Day packages (guaranteed to provide the lowest ferry/hotel fares) are selling quickly and many of the Victoria downtown hotels are already getting tight on space.